How Does WiFi Go Through Walls? WiFi is a wireless signal that transmit data between devices. The wifi signal transmits data through the air using radio waves. Radio waves are able to travel through walls, making wifi an ideal technology for home networking.

In order for a wifi signal to travel through walls, it must be strong enough to overcome the obstacles in its path.

If you’re like most people, you probably take your home wifi for granted. After all, it’s just there – always on and always available. But have you ever wondered how wifi actually works?

How does it travel through walls and other obstacles to reach your devices? The answer lies in the physics of electromagnetic waves. Wifi is a type of radio wave, which means it is an electromagnetic wave with a frequency that falls within the radio spectrum.

Radio waves are able to travel through walls and other solid objects because they are not absorbed by these materials. Instead, they pass right through them. So the next time you’re using your home wifi, take a moment to think about the amazing feat of engineering that allows you to do so! 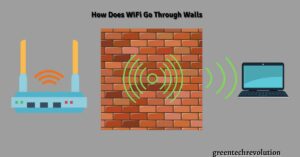 How Does WiFi Go Through Walls

How does WiFi go through walls? WiFi signals are able to travel through walls and other obstacles because they are transmitted using radio waves. Radio waves are a type of electromagnetic radiation, which means they can travel through the air and penetrate solid objects.

This is why you can still receive a WiFi signal even if you’re not in direct line of sight with the router. However, the number of walls or other obstacles that a WiFi signal can pass through will affect its strength. The more walls there are, the weaker the signal will be.

This is why it’s important to have your router placed in an open area so that the signal can reach as many devices as possible.

Radio Waves are a Type of Electromagnetic Radiation, Which Means They Can Travel Through the Air And Pass Through Solid Objects

Radio waves are a type of electromagnetic radiation, which means they can travel through the air and pass through solid objects. They are made up of oscillating electric and magnetic fields, and these fields are perpendicular to each other and the direction of the wave. Radio waves were first discovered in 1886 by German physicist Heinrich Hertz, and they have a wide range of applications today.

The most common frequencies used for communication purposes are between 3 kHz and 300 GHz. Radio waves at the lower end of this range (3 kHz to 30 MHz) are called longwave or LF waves, while those at the upper end (300 MHz to 3 GHz) are called microwaves or SHF waves. The strength of radio waves decreases with distance from the source; this is why we need antennas to receive them.

Monopole antennas consist of a single metal rod that is one quarter the length of the wavelength they are receiving; these are often used for cell phone towers since they take up less space than dipoles.

Here’s a quick explanation of how wifi works. First, there are two types of waves that wifi uses – radio waves and microwaves. Radio waves are longer and can travel further, but they can’t penetrate walls as well as microwaves.

Microwaves are shorter and can’t travel as far, but they can penetrate walls better. That’s why most wifi routers use both types of waves to give you the best coverage possible. Wifi signals are sent out from your router in all directions.

They bounce off of walls and other obstacles, and eventually some of them reach your device. The signal is then received by your device and decoded so you can access the internet. So that’s how wifi goes through walls – by using both radio waves and microwaves to reach your device no matter where you are in your home or office.

Now you know the science behind this amazing technology that we all use every day!